Japan intervenes for the first time since 1998. The Japanese government intervened to support the yen after the BoJ stubbornly stuck to its ultra-loose monetary policy, and the USD/JPY rose to 146.00.

Fed hiked rates by 75 bps. The Fed hiked rates in line with expectations and doubled down on the hawkish rhetoric. USD rallied to a 20-year high post announcement, and U.S. stocks dropped.

Russia escalated the war in Ukraine. Putin ordered partial mobilisation, the first since World War II, and Russia moved to hold annexation referendums. EUR/USD falls to a 20-year low near 0.98.

BTC/USD fell to a 3-month low. The cryptocurrency tumbled to $18300 after the hawkish Fed announcement as risk assets tumbled.

Ford falls 11%. The automaker warned of an additional $1 billion in supply chain costs during Q3 but did reaffirm a full-year adjusted profit of $11.5 billion. That didn’t soothe investors.

Riksbank goes big. The Swedish central bank hiked rates by 100 basis points, ahead of the 75 basis points forecast, and said that more hikes were to come. The Krona fell post announcement.

Meta falls to new 2.5-year lows. The stock has lost almost 60% of its value this year, dropping 12% this month alone. Slowing advertising revenue and high spending on the metaverse are hitting the stock.

The BoJ defied the global rate hike rush and stuck stubbornly to ultra-low rates and dovish policy guidance in its September meeting. This came just hours after the Fed hiked rates by 75 basis points and doubled down on its hawkish outlook.

The result? USD/JPY crossed the 145.00 line in the sand, sparking an intervention from Tokyo for the first time since 1998. The USD/JPY dropped below 141.00 before stabilising around 142.50.

However, with the BoJ clinging to the world’s only negative policy rate, the troubled yen may still need more support unless the BoJ is ready to change its stance.

1. Italian elections
Italian voters head to the polls on Sunday in a snap election, which is expected to see the far-right win. The polls show Fratelli d’Italia led by Giorgia Meloni, is ahead. An election win by this party could see leader Meloni becoming the first ever female Italian Prime Minister. It would lead to a right-leaning coalition, marking the country’s most significant political shift in years when Italy is dealing with surging inflation and ongoing economic instability.

3. US Core PCE
PCE fell to 6.3% YoY in July, well below the 7.4% forecast. However, core PCE, the Federal Reserve’s preferred gauge for measuring inflation, cooled only modestly to 4.6%, down from 4.8%. On a monthly basis, it rose 0.1% in August. In September, core PCE is expected to rise 0.3% MoM. Meanwhile, personal spending is also expected to increase by 0.2%, suggesting that inflation is unlikely to be cooling as quickly as the Fed would like. The data is likely to support the Fed’s hawkish position.

4. Porsche AG IPO
Volkswagen is looking to float Porsche AG shares on September 29th on the Frankfurt stock exchange in what is gearing up to be one of the largest IPOs in European history. The luxury carmaker could be valued at as much as €75 billion, with shares priced between €76.50 – €82.50, although this is slightly below the initial target valuation of €85 billion. Porsche’s debut will lift the IPO drought which has been hanging over the markets.

5. USD strength
USD strength has been unwavering in recent weeks. Hotter than expected inflation, a solid jobs market, and a hawkish Fed is keeping the greenback well bid. Safe haven flows are also in play here as Putin escalates the war in Europe and global recession fears rise. Combining this with the fact that there are few compelling alternatives to the USD right now, given the deteriorating position of the European and UK economy and worries over China, USD strength is likely to remain a key trend. 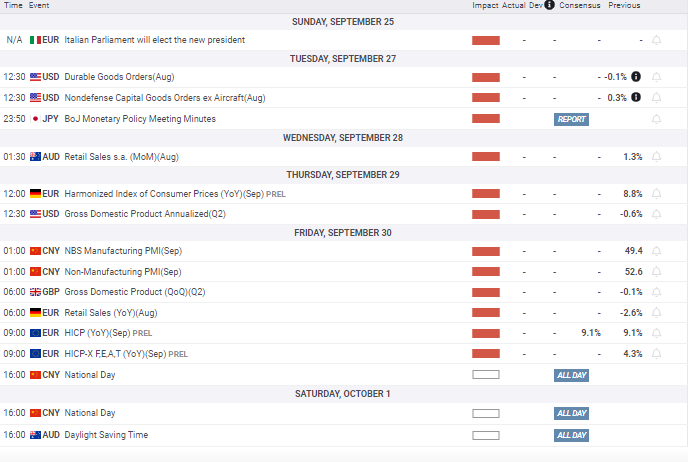 EUR/USD successfully broke the parallel channel to the downside. The market is about to post a higher correction since the completed ABCD pattern. More sellers could rejoin the downtrend near 0.988 to push the price down toward the 0.964 mark. A move above 0.988 could lead to a move higher toward 1.003.

The British Pound is correcting underneath a bearish trend line that coincides with recent lows near 1.136. More sellers could join the downtrend near the confluence area and push the price again to the 1.115 mark. However, if the price breaks above the 1.136 level, we could see the Pound testing 1.145.

USD/JPY is stuck inside a parallel channel made of the 142 and 145 levels. Since the market is still in an uptrend on the daily time frame, we expect a break out of the channel to the upside. If this scenario occurs, the price of the Yen could reach the 147.4 mark. A close below 142.6 could cause a move back towards 141.6.

The Aussie broke below a parallel channel and is now re-testing the bottom of the channel. After this correction, we expect a new bearish impulsive wave to complete the ABCD pattern. As such, the price could reach the next support level near 0.650. However, if the price moves back above 0.667, it could prompt a move higher toward 0.672.

Loonie is moving higher aggressively. However, the price has reversed to the area of confluence made of the 50% Fibonacci retracement level, the strong support and the bullish trend line. More buyers could rejoin the uptrend near this zone and push the price to the 1.360 mark. A move and close below the 1.339 mark would negate our bullish view.

Gold is bouncing inside a parallel channel formation. There is a high chance of a breakout below the bottom, in line with the downtrend on the daily time frame. If this scenario occurs, the price could reach the 1,617 mark. However, a close above 1,655 could cause a move higher toward 1,677.

UKBRENTOIL is bouncing inside a bearish flag formation where the price could test its higher end. More sellers could rejoin the downtrend near the 61.8% Fibonacci retracement level and push back the price to the 86 mark. However, if the price breaks and closes above 91, this could move higher toward 94.

US500 broke below its parallel channel to the downside after finding more sellers near the 61.8% Fibonacci retracement level. A correction higher towards the lower end of this range can be seen, leading to more selling pressure, with the price moving towards the 3,735 mark. Closing above 3,833 would negate our bearish view. 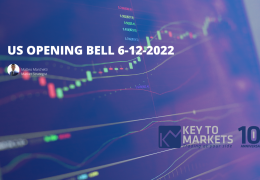 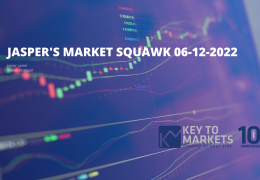 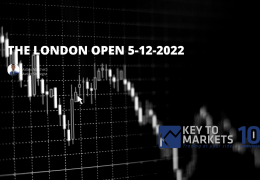 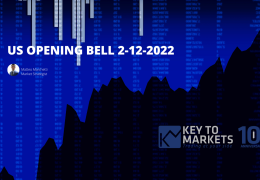